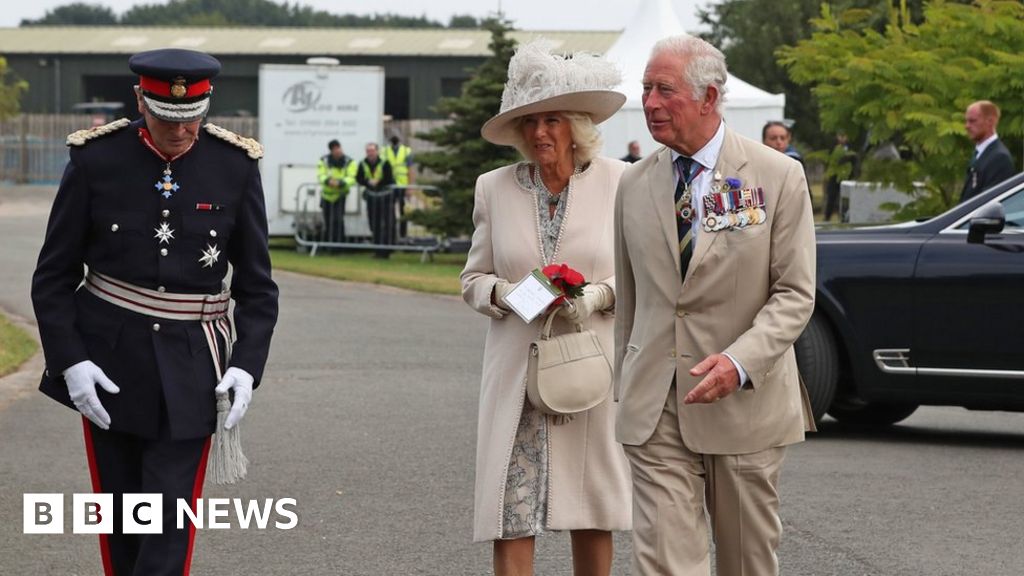 The Royal Family is leading the UK’s commemorations of the 75th anniversary of VJ Day – the day World War Two ended with Japan’s surrender.

The Prince of Wales is to take part in a two-minute silence at the National Memorial Arboretum in Staffordshire, as part of a service of remembrance.

The Duke of Edinburgh will feature in commemorations, appearing in a photo montage with other veterans.

A message from the Queen thanked those “who fought so valiantly”.

She said: “Those of us who remember the conclusion of the Far East campaign, whether on active service overseas, or waiting for news at home, will never forget the jubilant scenes and overwhelming sense of relief.”

The prime minister, who is also attending the event at the National Memorial Arboretum, has thanked those who fought for restoring “peace and prosperity”.

Earlier, Defence Secretary Ben Wallace was joined by military chiefs as he laid a wreath at the Cenotaph in London.

VJ Day – or Victory over Japan Day – on 15 August 1945 ended one of the worst episodes in British military history, during which tens of thousands of servicemen were forced to endure the brutalities of prisoner of war camps.

It is estimated that there were 71,000 British and Commonwealth casualties of the war against Japan, including more than 12,000 prisoners of war who died in Japanese captivity. More than 2.5 million Japanese military personnel and civilians are believed to have died over the course of the conflict.

The fighting in Europe had ended in May 1945, but many Allied servicemen were still fighting against Japan in east Asia.

Japan rejected an ultimatum for peace, and the US believed that dropping a nuclear bomb would force them to surrender. The US dropped two atomic bombs on Japan, killing an estimated 214,000 people, and two weeks later Japan surrendered.

To mark the 75th anniversary, Japan’s Prime Minister Shinzo Abe sent an offering to a controversial war shrine in Tokyo, but did not attend in person.

However, two of his ministers did visit the Yasukuni Shrine – in which 14 leaders who were later convicted by the Allies as war criminals are commemorated.

Boris Johnson has joined other world leaders including US President Donald Trump in recording a video message to thank veterans.

In the video, each leader says in turn: “To all who served, we thank you.”

Mr Johnson added: “On this 75th anniversary of the end of the Second World War, we pay tribute to the heroes deployed thousands of miles away in the mountains, islands and rainforests of Asia.

“Unable to celebrate the victory in Europe, and among the last to return home, today we recognise the bravery and ingenuity of those who, in the face of adversity, restored peace and prosperity to the world.

“Their immeasurable sacrifice changed the course of history and, at today’s commemorations, we take the opportunity to say what should be said every day – thank you.”

In a letter specifically addressed to Far East veterans, Mr Johnson said: “You were the last to come home but your achievements are written in the lights of the glittering capitals of the dynamic region we see today.”

“All of us who were born after you have benefited from your courage in adversity. On this anniversary, and every day hereafter, you will be remembered,” he added.

Labour leader Sir Keir Starmer also recorded a message, paying tribute “to the wartime generation, who through the horrors of conflict showed us the spirit and determination that we need to always remember and always be grateful for”.

“It’s important that as we face the challenges of today, we take inspiration from that generation,” he said.

Prince Philip, 99, was a young Royal Navy officer aboard a warship in Tokyo Bay when Japan surrendered.

The photo montage is a rare appearance for the duke, who has only been seen a handful of times in public since retiring in 2017 – most recently for a military event at Windsor Castle.

Meanwhile Capt Sir Tom Moore, who served in the Burma campaign has encouraged the public to join in the commemorations, describing VJ Day as “the most special day”.

“It was VJ Day when the pain of war could finally start to fall away as peace was declared on all fronts,” said Sir Tom – who raised millions of pounds for NHS charities by walking laps of his garden during lockdown.

“I respectfully ask Britain to stop whatever it is doing and take some time to remember.

“We must all take the time to stop, think and be thankful that were it not for the ultimate sacrifices made all those years ago by such a brave band of men and women, we would not be enjoying the freedoms we have today, even in these current difficult times.”

The commemorations began at sunrise, with a piper playing Battle’s Over at the Imperial War Museum’s HMS Belfast in London.

Military pipers also played at dawn in India, Australia, New Zealand and Nepal. In Japan, national memorial services have been held in Tokyo.

Prince Charles and the Duchess of Cornwall are attending a national service of remembrance and leading a two-minute silence from the National Memorial Arboretum in Staffordshire. The service is being broadcast on the BBC.

Before the nation falls silent, Mr Johnson is to read the Exhortation – the part of the war poem beginning “they shall grow not old”. This will be followed by a Battle of Britain Memorial Flight flypast.

A photo montage featuring Prince Philip and other veterans is being shown on a number of large screens across the UK.

On Saturday evening, the BBC will air a pre-recorded programme from 20:30 called VJ Day 75: The Nation’s Tribute, which will tell the story of those who served in the Far East and include a message from Prince William.

BBC One is broadcasting live from the National Memorial Arboretum between 09:30 and 11:30 BST.

Folks Online Can’t Get Enough Of These 10 Funny Analyses By...

Researchers map neurons in the brain involved with social interactions with...

Early dinosaurs may have lived in social herds as early as...