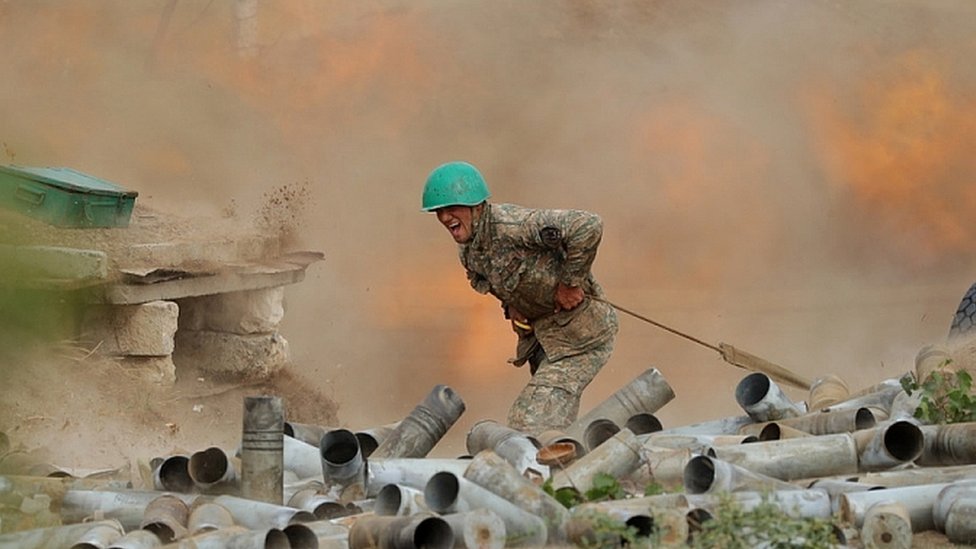 Russia has offered to host talks on ending the fighting over the future of the decades-long disputed region of Nagorno-Karabakh.

Foreign Minister Sergei Lavrov made the offer to the governments of the two countries claiming the area, Azerbaijan and Armenia. His office said he had urged a halt to “warlike rhetoric”.

More than 100 people have died since Sunday – the worst flare-up in years.

Officially part of Azerbaijan, Nagorno-Karabakh is run by ethnic Armenians.

Armenia and Azerbaijan – two former Soviet republics – fought a war in 1988-1994 over the region. There are growing fears that international powers could be dragged into the conflict.

On Wednesday, Mr Lavrov’s office said he had called the foreign ministers of both Armenia and Azerbaijan to say Russia was willing to host talks.

Russia is part of a military alliance with Armenia and has a military base in the country. However, it also has close ties to the government of Azerbaijan.

Armenia backs the self-declared republic of Nagorno-Karabakh, but has never officially recognised it.

It is unclear what triggered the recent fighting. On Wednesday, Azerbaijan’s President Ilham Aliyev vowed to fight on until Armenian forces left the territory.

“We only have one condition: Armenian armed forces must unconditionally, fully, and immediately leave our lands,” he said.

Azerbaijan published video of what it said was the destruction of two “enemy” tanks and said an Armenian battalion had fled the area around the village of Tonashen.

Armenian media said three civilians had been killed in an Azerbaijani air attack on the town of Martakert on Wednesday. State news agency Armenpress said seven civilians and 80 service personnel had been killed since the fighting began.

Armenia’s defence ministry also released a picture of an Armenian SU-25 jet it said had been shot down by a Turkish F-16 on Tuesday. Turkey, a staunch ally of Azerbaijan, has rejected the allegation as “cheap propaganda”.

One fighter has told BBC Arabic he was recruited in northern Syria last week and sent via Turkey to fight in the conflict. Ilnur Cevik, an adviser to Turkish President Recep Tayyip Erdogan, dismissed the report as “completely unfounded”.

The conflict has raised tensions between Nato allies France and Turkey. France is home to many people of Armenian ancestry while Turkey has traditionally supported its fellow Turkic nation Azerbaijan.

Mr Macron hit back, criticising “warlike messages” from Turkey “which essentially remove any of Azerbaijan’s inhibitions in recapturing Nagorno-Karabakh”.

“And that we won’t accept,” he added.

After Mr Macron and Mr Putin held talks, the Kremlin issued a statement saying they had discussed future steps that the Minsk Group of the Organization for Security and Co-operation in Europe (OSCE) could take to help resolve the conflict.

The Minsk Group was set up in 1992 and is chaired by France, Russia and the US.

More on this story

50 Times People Failed In The Kitchen So Badly, They Just...